Properly managing data does not necessarily equate to sharing or publishing those data. But it is a good idea to complete the data lifecycle through sharing and publishing. 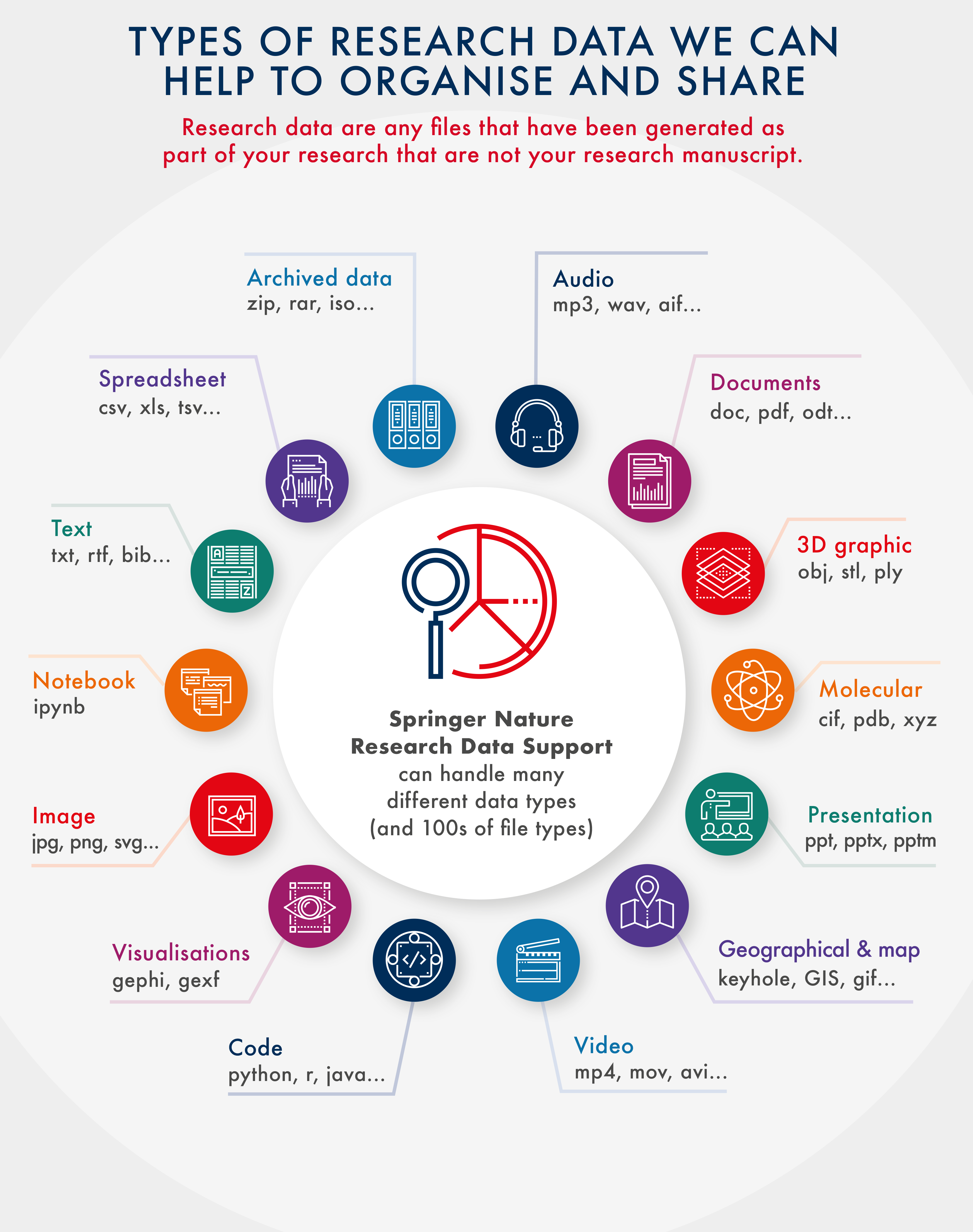 Some kinds of data might not be sharable due to the nature of the items themselves, or to ethical and privacy concerns. As defined by the OMB, this refers to:

Additionally, research data managment is not records managmeent for projects or university business data. And therefore does not manage such items as:

Plan the directory structure and file naming conventions before creating your data. Plan for version tracking of datasets and documents. Use project-specific conventions or disciplinary standards or best practices. The following are general best practices.

Metadata is structured and descriptive information about an item or object. It is a standardized way to explain the who, what, where, when and how of data creation and methods. Metadata and other documentation enable the researcher to understand their data in detail and enables other researchers to discover, use and properly cite the item or object. Metadata standards have been created to facilitate the description of research data using a defined set of elements. And some disciplines have preferred metadata standards.

Data repositories may have specific metadata standard requirements that must be met in order to deposit data. If you intend to deposit your data in a subject- or discipline-specific repository, check their deposit and metadata requirements before including the repository in your data management plan.

As the custodian of the primary data, the researcher should ensure project data are properly documented in order to facilitate current use and enable future discovery and sharing. As early as you can, document your data and your data organization protocol, even before data collection begins; doing so will make data documentation easier and reduce the likelihood that you will forget aspects of your data later in the research project.

The following is a list of elements and aspects of your research project and data that should be documented, regardless of discipline. At minimum, this information should be stored in a readme.txt file or the equivalent, together with the data. The Mines Research Support Services group uses this documentation to create the required metadata for the Mines institutional repository.

– Elements marked with an * are required by the Mines institutional repository.
– See the Deposit with Mines page to understand the submittal process

To deposit in the Mines institutional repository, metadata (a description of the item/object) is required. The following example is for a dataset and is typical of the information that needs to be gathered in order to make a deposit.

Abstract: Six sites approximately 6 km apart were selected at the Central Plains Experimental Range in 1997. Within each site, there was a pair of adjacent ungrazed and moderately summer grazed (40-60% removal of annual above ground production by cattle) locations. Grazed locations had been grazed from 1939 to present and ungrazed locations had been protected from 1991 to present by the establishment of exclosures. Within grazed and ungrazed locations, all tillers and root crowns of B. gracilis were removed from two treatment plots (3 m x 3 m) with all other vegetation undisturbed. Two control plots were established adjacent to the treatment plots. Plant density was measured annually by species in a fixed 1m x 1m quadrant in the center of treatment and control plots. For clonal species, an individual plant was defined as a group of tillers connected by a crown (Coffin & Lauenroth 1988, Fair et al. 1999). Seedlings were counted as separate individuals. In the same quadrant, basal cover by species, bare soil, and litter were estimated annually using a point frame. A total of 40 points were read from four locations halfway between the center point and corners of the 1m x 1m quadrant. Density was measured from 1998 to 2005 and cover from 1997 to 2006. All measurements were taken in late June/early July.

Spatial: The Short Grass Steppe site encompasses a large portion of the Colorado Piedmont Section of the western Great Plains. The extent is defined as the boundaries of the Central Plains Experimental Range (CPER). The CPER has a single ownership and land use (livestock grazing). The PNG is characterized by a mosaic of ownership and land use. Ownership includes federal, state or private and land use consists of livestock grazing or row-crops. There are NGO conservation groups that exert influence over the area, particularly on federal lands.